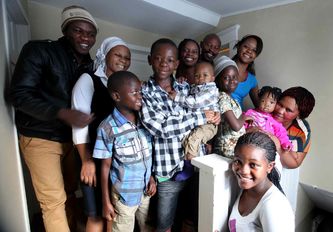 Much of the world saw turmoil and disasters in 2013, but for the 12-member Bahati family, it was a year of wonderful new beginnings.

On Dec. 10, the family that fled fighting in Congo to become refugees in Uganda finally found a permanent home in Winnipeg.

"I feel good," said 15-year-old Izabel. "We have good things and a big house," she said on New Year's Eve day inside their two-storey rental home in Wolseley.

The family helped Hospitality House Refugee Ministry set a new record for the most arrivals in one year. The largest private-sponsorship agreement-holder in Canada had 576 arrivals in 2013, said executive director Tom Denton. The previous record was 358 in 2012. Of the 576 who arrived in 2013, 462 came to Winnipeg and 114 landed in Toronto, Ottawa, Calgary and Edmonton. Not all landed in Winnipeg because in the time it took for Canada to process these cases overseas, some of the local sponsoring families relocated to other provinces, Denton said.

Manitoba is expecting a five per cent decrease in the number of refugees and immigrants welcomed in 2013. A provincial spokeswoman said Tuesday she expects between 12,000 and 13,300 newcomers came to Manitoba last year. That estimate is based on 10 months of data from last January to October, she said, adding preliminary figures for the full year won't be available until February.

The increase in the number of privately sponsored refugees welcomed by Hospitality House is the result of Citizenship and Immigration Canada clearing a backlog of old applications, Denton said. The federal government has drastically cut the number of new refugee-sponsorship applications it accepts in order to deal with all the old files in the system, such as the Bahati family's.

The father, 49-year-old Nyamuzimda and mother, 42-year-old Faida, have four sons and five daughters ranging in age from 20 to one, and a one-year-old granddaughter.

The family was outfitted by Siloam Mission. "People are really coming through now with a lot of stuff," said Denton.

The family arrived three weeks ago and is raring to go, said Izabel, who likes math and wants to be an accountant. She and her school-age siblings are looking forward to starting classes in January, she said. Her brother, Gislain, 20, has already worked some shifts for a temporary agency and is looking for permanent work. They're attending a neighbourhood Protestant church.

The family was sponsored through Hospitality House by a relative, Bashengezi Mushagalusa. "They are refugees and they have been refugees for a long time," said the tailor, who works for Mitchell Fabrics.

"I was also a refugee there," said the Congolese Mushagalusa, who arrived in Winnipeg from Uganda in 2008. "I know how things go there." His brother died as a refugee in Uganda and Mushagalusa was never able to learn how or why he died. To him, sponsoring the families to come to Canada is a matter of life or death. The father of seven has sponsored three big refugee families to come to Canada. He credits divine intervention with making it happen.

"I consider it is God doing this," he said.

Finding a big rental home in a tranquil neighbourhood for the Bahati family on short notice was practically a miracle, Denton said.

"It's been an amazing year."

He doesn't know how many refugees his agency will help settle in 2014.

"It's a crapshoot," he said. "We don't know. My guess is probably as many or more than last year."

The next date they expect newcomers to arrive is Jan. 30, but that's likely to change, he said.

"We're often the last ones to know," he said. "The system has to grind out the notice while families just get on the blower and phone each other."