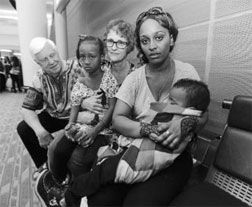 Hospitality House is unable to start any new sponsorship cases at this time, neither full sponsorship cases nor family-linked cases. This situation arises from the fact that not only are new cases restricted by the Canadian government, but Hospitality House is itself overloaded with the work of managing its existing open files that currently cover more than 4,000 refugees, either still overseas and waiting to come or within their first year in Canada and still our responsibility.

The Canadian government restriction arises from the continuing overload of cases overseas where more than 20,000 privately sponsored refugees are still awaiting processing selection against an annual quota for arrivals of about 6,300.

The inventory challenge for both the Canadian government and Hospitality House is expected to continue until 2016. Even then it is not expected that the government will allow unrestricted sponsoring because to do so would soon replicate the over-inventory situation of the past.

The annual cap on all forms of immigration to Canada is an on-going issue. Hospitality House is unable to develop wait lists for applicants. It would be an exercise in futility because we turn down now requests to sponsor more than 5,000 refugees every year, a number that is not only far beyond our capacity but would never be allowed within existing Canadian government policy.